This article contains graphic images that may upset some readers.

So far, CNN has reported that at least 18 people have died as a result of the bushfires, and more than 900 homes have been destroyed. Sadly, the death toll and destruction of wildlife have been even more intense.

Ecologists with the University of Sydney have estimated that since September, almost half a billion animals have died! Let me repeat, half a billion! ABC Radio has reported that 8,000 koalas have been killed, meaning that 30% of the koala population in New South Wales have been wiped out. There have been reports of thousands of birds – including the sulfur-crested cockatoos – just falling out of the skies dead as a result of all the intense heat, stress, and smoke.

#Australia. I’m not sure a picture could better sum up the fear and devastation more succinctly. I’m no expert but from the messages and reading I’ve done on the subject, mismanagement of forest underbrush back-burning in the winter months and overall water resources have helped create a perfect storm in the face of this drought. I hope there is a silver lining and important lessons learned from the ongoing catastrophes once the dust settles. One of my biggest fears as a kid was fires and ironically enough, my mom was a firefighter. Maybe one created the other. Hoping for safety and refuge for all my human and animal friends down under. Feel free to put links and info to good charities and support groups in the comments below.

Besides all this devastation, the Australian government has come under fire due to it not curbing coal use – something which accounts for more than 60% of the country’s electricity. And while rapid phasing out of coal use is vital to helping curb climate change, Australia’s rank as the globe’s biggest coal exporter is putting both human and animal lives in great danger.

While the bushfires continue to rage with no signs of slowing down, saving lives is currently the top priority. There are plenty of ways to assist the people affected by the fires, but if you’re looking to specifically help save the vulnerable animals, there below are four ways to contribute.

GreaterGood.org is working with responding partners including IFAW, World Central Kitchen, and Humane Society International to fund meals for displaced people, temporary shelter, and medical care for pets and wildlife affected. 100% of your emergency donations will go to support response and recovery from this tragedy. Rush your gift today—any amount helps. 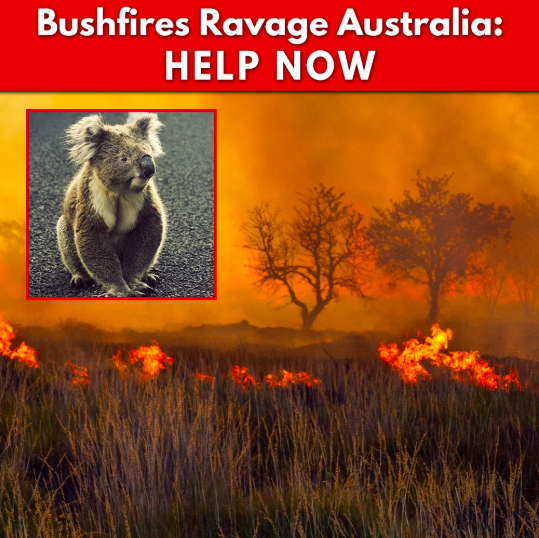 WIRES – New South Wales Wildlife Information, Rescue and Education Service Inc. – is Australia’s largest wildlife rescue organization, and they are desperately seeking emergency donations in order to increase their capacity to aid the poor animals caught in the flames. Based off their website, WIRES receives between 600 and 1,000 calls every single day from people asking for them to provide assistance rescuing or caring for sick, injured, or orphaned animals.

This applies to everyone living in Australia who is safe, but still living in the areas close to the fires. WIRES also cautions people not to attempt rescuing animals without proper training first. However, if you do encounter an injured animal that you are able to get to the nearest vet, WIRES says that you shouldn’t feed the animal, but instead try to wrap it loosely in cotton fabric during transport. WIRES also recommends leaving out shallow bowls of water for fleeing birds and animals.

Australia is on fire and it’s terrifying. The catastrophic bushfires have scorched over 5 million hectares of land, taking with them over 20 human lives, and killing almost half a billion (480 million) animals.⠀⁣⁣😥😱 Tap on the linkinbio to donate ⚠ Follow @travelislifestory Follow @travelislifestory – – Video/Photo by @thuie – – #adventureseeker with #travelguide and this #travelbook and also #travelersnotebook we keep going this #travel_captures we find #travelislife and every day we #travelnow so they #travelwithme keep #travelaroundtheworld love #travelandleisure we set up #travelgoals because we are #traveladdicted and we love #travel_ig all around #travelworld and we #travelnow with #travelwithkids and #explorers to take #worldwide_shot and #travelphotos because we love #adventurephotography and #adventureland also #bloggerfashion because we #lovetravelling and #lovetravels so #betraveler all around #travelingplanet #prayforaustralia #australia #australiafires #bushfiresaustralia

4. Donate To The World Wildlife Fund

The World Wildlife Fund, also known as WWF, is responding to the state of emergency in New South Wales, and they’re asking people to please donate to the relief efforts. Once the bushfires clear, the areas that have been devastated will definitely need to be restored and made habitable again. The WWF is preparing to restore homes as well as care for the injured wildlife, and these efforts will include providing emergency aid as well as continuing advocacy efforts in order to try and prevent these kinds of catastrophes.

So whether you’re living on the Australian continent itself, or residing on the far side of the world, now is the time for all of us to come together in the face of destruction to help the animals of Australia. Let’s all do the decent thing and donate.