Nature abhors a vacuum, and in the case of Chernobyl, quickly forgets nuclear fallout.

The area around the Chernobyl Exclusion Zone in Pripyat, Ukraine was sealed to the public when the nuclear power plant there exploded on April 26, 1986. The radiation from the explosion was about 400 times more potent than that from Hiroshima in World War II. Today, 30 years after the event, wildlife has already returned and is somehow flourishing.

In April, a group of researchers who visited the area published their remote-camera scent-station survey findings in an Ecological Society of America article.
They found 14 different species of mammals living in the CEZ, including the gray wolf, raccoon dog, Eurasian boar, and red fox.

“We found no evidence to suggest that their distributions were suppressed in highly contaminated areas within the CEZ. These data support the results of other recent studies, and contrast with research suggesting that wildlife populations are depleted within the CEZ,” reported the team of James C. Beasley and his colleagues from the University of Georgia’s Savannah River Ecology Laboratory. “Specifically, there are large knowledge gaps pertaining to occupancy trends and densities of mammals in the CEZ, and it is unclear what effects chronic radiation exposure may have on their population status and distribution; such data are vital for informing future management or protection of wildlife inhabiting contaminated landscapes.”

When writer John Wendle visited the area for National Geographic in 2016, he saw evidence of beaver activity doing more to change the landscape than anything else. The wolf population is now seven times as large as it was before the disaster. Marina Shkvyria, a wolf expert at the Ukraine’s National Academy of Sciences, posits that the area will soon be transformed back into a bog, as it looked long before any nuclear reactor was built on the land. 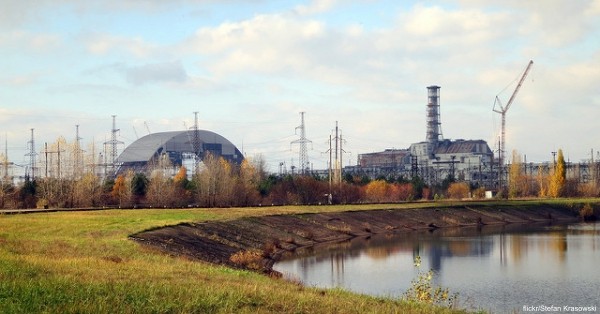 CNN reported that the disaster sent a cloud of radioactive fallout over huge swathes of Russia, Belarus and Ukraine, which could have an impact on the health of many in those countries. A majority of the fallout affected Belarus, according to UNICEF, and 20 percent of the adolescent children there suffered from disabilities and chronic illness after 1986. A lack of iodine in the diets of those in the contaminated region has also made them more susceptible to thyroid cancer and iodine deficiency disorders.

Current efforts to contain the radioactivity still emanating from the Chernobyl reactor include placing a massive and painstakingly-crafted arch over the site. Workers are building this 32,000-ton arch near the reactor so it can be moved into place by 2017. Until then, work crews must be vigilant and rely on concrete slabs to shield them from the radiation.

The drawbacks of nuclear power are obvious. Most recently, a 9.0 earthquake near the nuclear facility in Fukushima, Japan has brought their environmental consequences to light. Now is the time to speak out to our world leaders about the dangers of nuclear energy. Even though nuclear power poses great risks to human health, much of the world still relies on it. Sign this petition lobbying the United Nations to come together and vow to work toward creating a nuclear-free world.