A student at Brown University has discovered that chameleons have a remarkable ability that sets them apart from other animals on Earth. Not only do chameleons change skin color, but these reptiles also catch food very quickly once they unload their tongues on unsuspecting prey. Chameleons latch onto their food so fast that if you close your eyes for even one second you might miss this incredible feat! 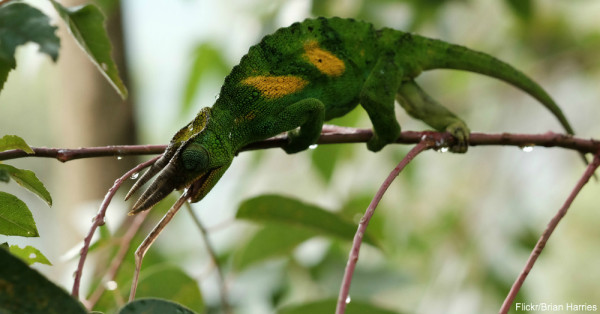 A chameleon’s body moves relatively slowly compared to other animals in its environment. Instead of moving their entire bodies very quickly, these reptiles make up for lack of body movement with their very fast tongues. When an insect shows up on a tree branch, this reptile shoots out its tongue with astonishing speed to catch unwary prey. Christopher Anderson studied the mechanics behind these tongue-lashings and took high-speed video recordings of the masters at work.

What Anderson found is that smaller chameleons have faster tongue speeds, according to the Washington Post. In fact, the Rhampholeon spinosus shoots its tongue out of its mouth at a whopping 8,500 feet per second. That amounts to going 0 to 60 miles per hour in 1/100th of a second, with a speed 264 times the force of Earth’s gravity. Larger species, such as Furcifer oustaleti, have tongues that are 18 percent slower than those of their smaller cousins. 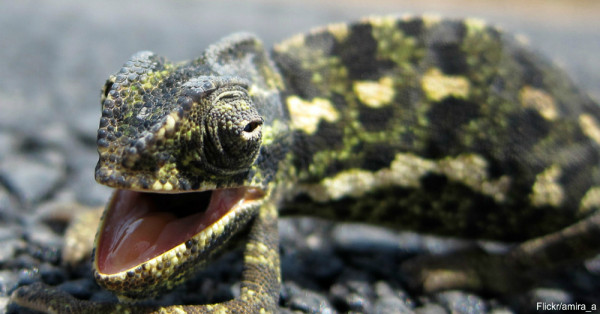 No matter what speed a chameleon’s tongue achieves, insects rarely know what’s coming. Before a bug knows it, the chameleon’s sticky tongue latches on and doesn’t let go. How’s that for fast food?

This amazing video shows just how deadly accurate chameleons can be with their tongues as they catch their favorite food. The reptile expertly launches its tongue straight at a cricket suspended in the air. This footage shows that this chameleon can launch its tongue up to 2.5 times the length of its body to bring meals to its mouth.

The video captured these images at 3,000 frames per second, which is extremely slow motion; normal movies have 24 frames per second. Anderson examined 55 individual chameleons from 20 different species, and he watched 279 feedings recorded at this high speed, and measured the speed and force behind each tongue.

To achieve incredible tongue speed, R. spinosus utilizes the highest muscle power found in any land-based vertebrate animal on Earth. Chameleons have special muscles in their mouths that allow tongues to contract much in the same way as a bow when a person pulls back the string, notes National Geographic. Chameleons then release their bow-like tongues at an extremely high rate of speed. Anderson believes smaller chameleons have quicker tongue speeds because they must compete with larger chameleons for food in the same natural habitat. 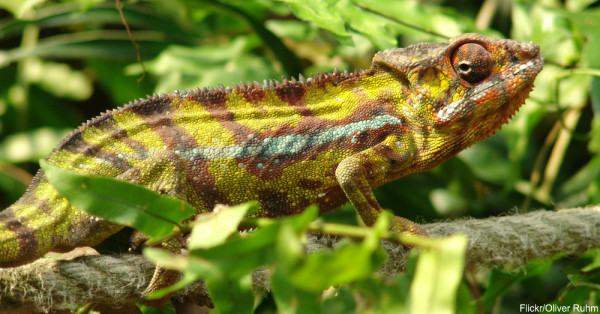 The Earth harbors 180 species of chameleons, and many face habitat loss, while others are sold in stores as pets. These beautiful reptiles can’t adapt quickly to changes in their habitats simply because they move so slowly. When a bunch of trees come down, chameleons can’t move to another area with more trees, unlike birds or faster-moving mammals. Having chameleons on the edge of crop land in tropical areas can help control insects naturally, without harsh pesticides, so these reptiles can help humans by protecting food crops from tiny invaders.

Chameleons are amazing animals, with a prehistoric look and some truly astonishing adaptations to life in the modern world! They definitely deserve our protection and respect.