A dedicated team from International Animal Rescue (IAR) raced into action in February 2016 to try to save a mother and baby orangutan from starvation. Wildfires decimated a huge area of the Indonesian jungle where these apes live, and locals reported two orangutans eating their crops. Without the IAR team’s intervention, Mama and Baby Nam might well have had a much worse outcome. 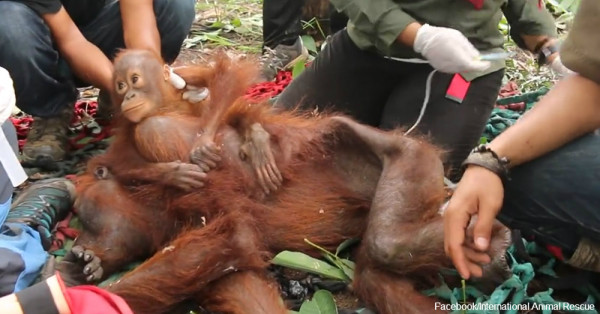 The mother orangutan, called Mama Nam by IAR, was clinging to a tree and clinging to life near a palm oil plantation when rescuers found her. Her baby, nicknamed Baby Nam, hugged Mama for protection and comfort. Farmers complained of the apes eating their crops, so the team rushed into action to try to save the apes.

These two were victims of late 2015’s massive wildfires on the islands of Borneo and Sumatra, which destroyed 10,000 square miles of forest. Indonesia’s agriculture interests clear land for large palm oil plantations by burning native rainforests. At least nine other orangutans didn’t make it, while many others were badly affected by the one of the worst years for wildfires on record. 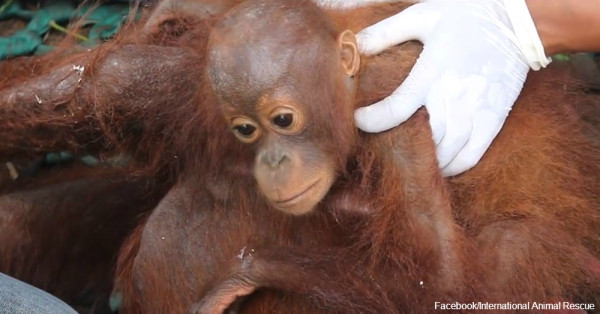 More than 100 orangutans were rescued and relocated after fires (often intentionally set) destroyed their homes. Seven orphans, five of them infants, had to go to rehabilitation centers. Mama and Baby Nam were lucky enough to survive the fires, but they found themselves nearly starving to death, as the infernos had destroyed much of their natural food sources.

Despite the emaciated condition of Mama Nam, it took three tranquilizer darts before she let go of the tree and fell into the waiting net below. The mother simply didn’t want to be without her baby. Caretakers tried to examine the mom and the baby on site, but the baby wouldn’t let go. The pair were transported together to a care facility. It would be another two months before the team could release the pair back into the wild.

With Mama Nam looking healthy again — without the gaunt, harrowed appearance she had before rehabilitation — IAR was able to release the two back to their natural habitat. The support team trekked for three hours through the burned-out rainforest to find jungle dense enough to be appropriate for the pair’s release. As soon as the handlers opened the cage, Mama Nam leaped out and took her baby, clutching her front, straight up into the trees, obviously glad to be home again.

Mama and Baby Nam exemplify the dire need to take care of animals in peril, especially in the quickly disappearing forests of Sumatra and Borneo.

Do your part to help by speaking up for orangutans affected by intentional fires.