When the David Sheldrick Wildlife Trust in Kenya rescued an orphaned gerenuk in 2013, it became host to one of the most fascinating and beautiful antelopes in Africa. Like all gerenuks, the lithe, slim male named Nuk has lovely long eyelashes and sensory hairs on its ears and muzzle that help him avoid thorns while nibbling on succulent leaves in bushes. He also has a unique physiology that allows him to get all the moisture he needs from the leaves he eats without ever taking a single drink of water. Nuk has since successfully returned to the wild, but he shows his affection and gratitude to his human rescuers by returning for a visit now and again.The name gerenuk comes from the Somali word for “giraffe-necked.” This refers to the species’ long, slim neck that, along with their ability to stand on strong hind legs, allows gerenuks to reach leaves and shoots on tall bushes up to seven feet off the ground. Their abilities to reach high for food and go without standing water give them advantages over other antelope species. Gerenuks inhabit dry brushy areas of Africa from Ethiopia and southern Somalia to Tanzania. 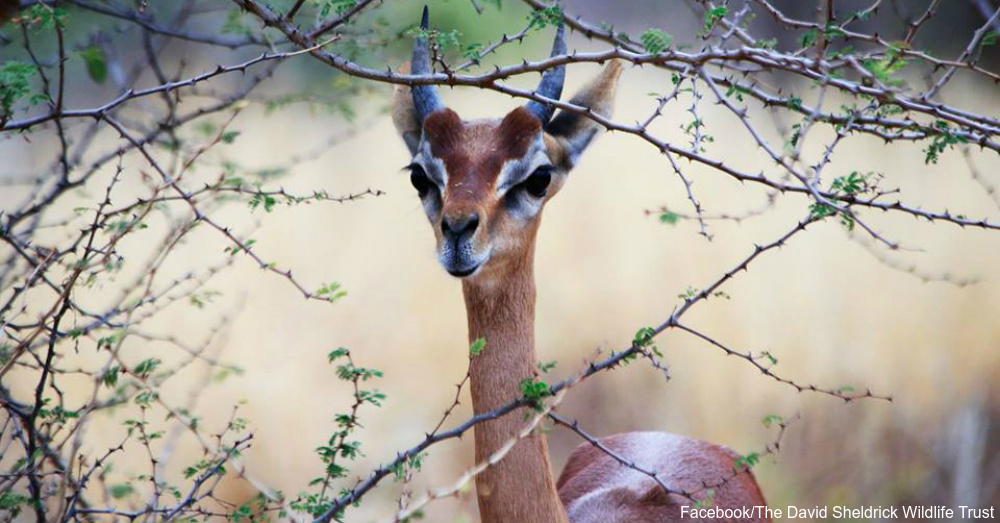 Although female gerenuks form bands of up to 10 members, adults males like Nuk generally remain solitary, marking individual territories with their scent. When they come across possible mates, males go through an elaborate ritual of posing, circling, following and sampling the scent of a female until she is ready to mate. Once the mating is complete, males repeat the procedure with as many females as are available. Female calves mature faster than males, so mothers usually remain with female young for one year, but with male young for about a year and a half.

Once the wildlife trust released Nuk back into the wild, he teamed up with a herd of impalas, probably for protection from predators that prey on antelopes, such as lions, leopards, cheetahs and hyenas. Trust personnel are hopeful that he can locate a female and start mating soon.Due to habitat loss, there are only about 95,000 gerenuks left in the wild. Their current conservation status is near threatened. We can all help save African animals with a direct gift.