Some of the most compelling images in this contest show humanity trying its best, despite the worst.

The winners of this year’s Environmental Photographer of the Year have been chosen by CIWEN for their excellence in “Highlighting the impacts being wrought on our planet by its most dominant species,” according to the competition’s organizers, “the competition also celebrates humanity’s innate ability to survive and innovate, lending hope to us all that we can overcome challenges to live sustainably.”

Topping this year’s list are images of human resilience in the face of drought, the impending threat of man-made climate change, and the persistence of life in the most polluted and impoverished places on earth.

Supported by the UN Environment, Arup, and Olympus UK, this contest is not just about showing where the human will to live is greater than pain and suffering, it also “exists to inspire change from political leaders, decision makers, and the general public.”

Here are some of the winners from the collection.

Drought caused by climate change has led to starvation and impoverished villages near the equator.

Photographer SL Shanth Kumar captured this images of homes beleaguered by flooding in Mumbai. The waves dragged a fisherman from his home in Bandra, before he was rescued fellow fishermen. The effects of climate change have caused sea levels to rise, putting low-lying cities at risk.

Remains of the forest

Only 10% remains of the 12,000-year-old Hambach Forest in Western Germany. After a power company purchased the land to dig for coal, the forest was clear cut and left in ruin.

Sharks are being killed at a record pace, though international law has tried to protect them for years.

Tuvalu beneath the rising tide

Poachers have nearly wiped out every rhino on the planet, prompting conservationists to de-horn the animals, decreasing their value on the black market, and increasing their chances of survival. The rhinos’ horns but be sawed off every year, or every other, to deter illegal hunters.

The city of Mexicali, the capital city of the Mexican state of Baja California, on New Year’s Day. Mexicali suffers one of the highest levels of air pollution in the world, owed to a largely unchecked manufacturing sector, fireworks, and automobile exhaust.

Clothes hang on a tree to dry while a child plays in the desert. 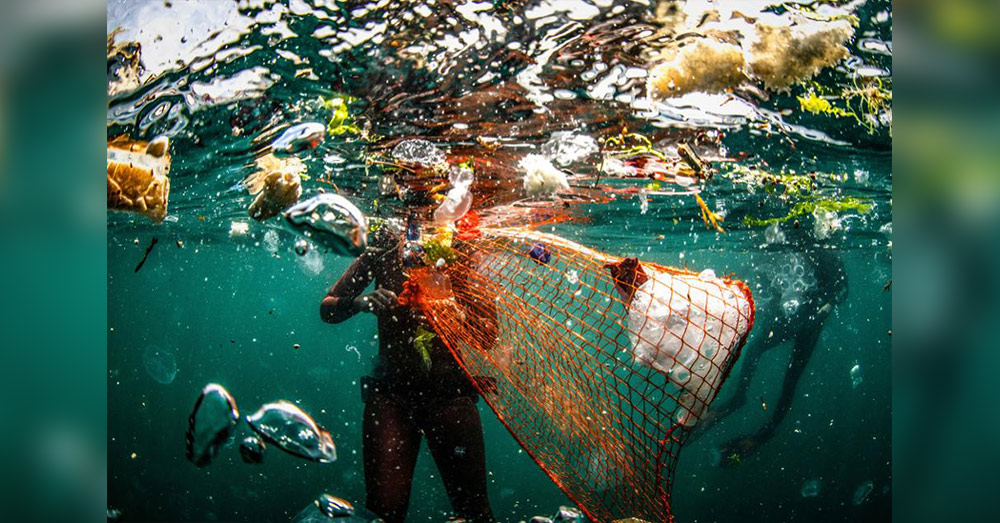 A diver with the Zero Waste Blue project works to clean the Bosporus near Istanbul, Turkey.

A woman sews a small-hole fishing net in Phu Yen, Vietnam. Such nets are responsible for the disappearance of countless marine species, and are commonly left to float in the ocean when they are no longer of use, killing many more sea creatures for years to come.

A young girl sleeps on a schoolroom desk in Burkina Faso. Torrential rains and severe droughts have crippled the region’s capacity for food production, and driven many from their homes.

Workers in Dhaka, the capital of Bangladesh, cross a rickety bridge while carrying coal on their heads.

A Nepalese family picks through the Sisdol landfill, hoping to find something of value.

A polluted riverbank in Bangladesh provides a bed for a tired woman.

Plastic pollution is strangling the planet, with about 380 million tons being produced worldwide each year. In this image by photographer Aragon Renuncio Antonio, a young boy plays with a plastic bag.