Trophy hunting is viewed more and more as a cruel act against innocent animals. Some of the world’s most magnificent animals are being murdered for “sport”. The battle against trophy hunting rages on with the latest killing of a giraffe.

The public was outraged at the latest trophy hunting display. An American female hunter, Tess Thompson Talley, killed a rare black giraffe on a hunting trip in South Africa. The gentle animal was shown slumped over behind the woman. It is a heartbreaking image. 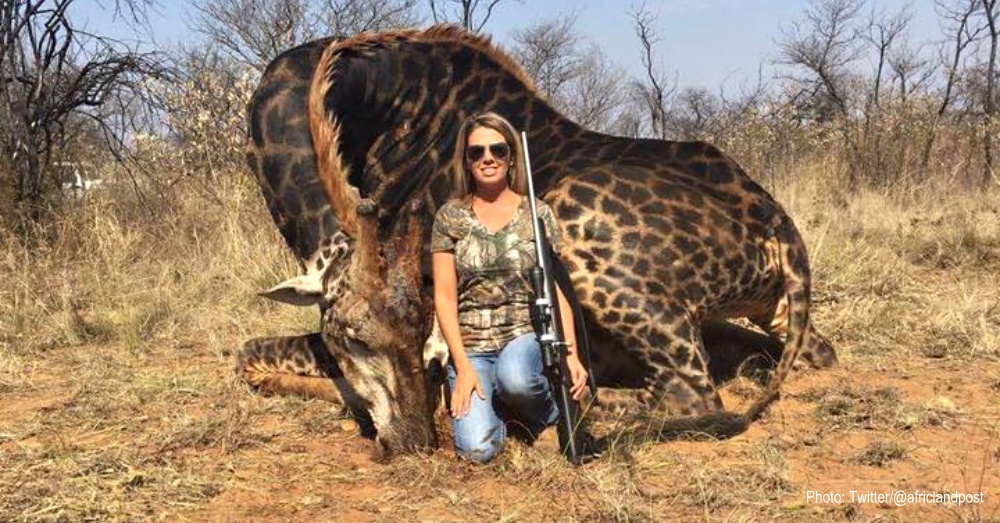 She posted pictures of her posing next to the dead body. With the status, “Prayers for my once in a lifetime Dream hunt came true today. Spotted this rare black giraffe bull and stalked him for quite awhile. I knew it was the one. He was over 18 years old, 4,000 lbs and was blessed to be able to get 2,000 lbs of meat from him.”

This opened the flood gates for people to oppose the disgusting act.

Africa Digest was completely disgusted and posted, “White American savage who is partly a neanderthal comes to Africa and shoot down a very rare black giraffe courtesy of South Africa stupidity. Her name is Tess Thompson Talley. Please share. If our so-called governments can’t care for our wildlife then its time we stand up and responsibility of our continent, lands, resources, and wildlife…. share share share! and let’s have a united voice against pillage of Africa, it’s the only home we have.”


While the business of allowing trophy hunters come to South Africa to hunt exotic animals has been lucrative, locals do not believe that outweighs the devastation to the species. Still, the practice is legal in South Africa, Namibia, Zambia, Zimbabwe, and several other African countries, Fox News reports.

Talley maintains she’s not only done nothing wrong, but actually helped the species as a whole.

“The giraffe I hunted was the South African sub-species of giraffe. The numbers of this sub-species is actually increasing due, in part, to hunters and conservation efforts paid for in large part by big game hunting,” she wrote in an email to Fox. “The breed is not rare in any way other than it was very old. Giraffes get darker with age.”

Talley says killing the bull giraffe was “conservation through game management,” as it had previously killed three younger bulls who could have otherwise bred. Removing the senior bull, she says, made room for the species to grow.

Not everyone is convinced of Talley’s logic, however. Giraffe populations have decreased by 40 percent in the last three decades, largely because of trophy hunting and illegal poaching. They are now on the IUCN’s red list of endangered species.

“Giraffes are facing a myriad of threats including poaching and habitat fragmentation,” Adam Peyman, manager of wildlife programs and operations for HSI, told The Guardian. “Their dire conservation status should not be further compounded by the horror of trophy hunters bent on killing them for senseless and gruesome trophies.

“Our investigation indicates that trophy hunting outfitters in Africa are capitalizing on every last bit of these beautiful animals,” Peyman continues. “They are selling them to taxidermists, animal product manufacturers and dealers, who in turn market them to sellers in the US. As this is completely unregulated, it is an easy alternative for products from other, more protected species like elephants and lions, but may still have the similar macabre allure.

HSI maintains that the giraffe population has declined at least 40 percent over the last three decades, and the continued import of their hides and bones only makes matters worse.

Many of the animals that trophy hunters kill are classified as being threatened by extinction by the IUCN. Other countries have already banned trophy hunting to preserve their wildlife. All countries need to adopt that policy.